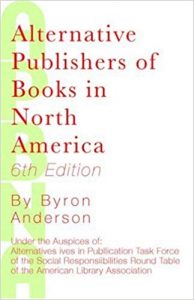 Price: Out of print

Interview with compiler Byron Anderson
Preface by Nancy Kranich
From the Introduction:

The presses profiled in this directory were culled from hundreds of small, active independent presses. This effort builds on the previous five editions of this directory. In total, one will find 126 U.S. presses, nineteen Canadian, and eighteen international presses having either a North American address or distributor. Thirty-three presses are new to this edition. To be included required minimum at least five titles in print and on average the publication of one new title per year. The presses that remained after all the culling and limiting were the 163 active alternative presses found in this directory.

Alternative press as a term is nearly inexplicable. Everything is alternative to something else, meaning that one could theoretically define “alternative” as one would wish. Yet, in social and political arenas, “alternative” is a term generally associated with the political Left. The 102 headings found in the subject index further help to define the presses by assigning them publication interests in the areas of, for example, sustainable development, punk, social justice, gender studies, human rights, anarchism, and globalization. The presses provide a platform to spread progressive ideas to activists and ordinary citizens alike, and the publications help the ideas find a place in our culture.

Alternative publishers counter the concentration of media ownership, which for the publishing industry amounts to six conglomerates that dominate in book sales and marketing. In this competitive arena, small alternative presses lack resources to compete and for the most part are marginalized. This business environment is a form of market censorship which makes media consolidation an intellectual freedom issue. Alternative presses struggle to get their publications into libraries and the hands of readers, and have limited resources to do so.

The presses profiled are, first, independent, that is, independent of corporate ownership. Exceptions are a few imprints of larger presses; however, there is every reason to believe that these alternative presses have editorial control over their publications. Second, the presses are small, averaging approximately one to 100 new titles per year. Third, alternative publishers are generally not driven by profit or the bottom line, though breaking even is essential for survival and profit is important for expanding the press’s mission and output. They often have to rely on grants and donations to survive, and many have a 501(c)(3) not-for-profit status. Fourth, the publishers are individuals often dedicated to a cause or movement and are frequently driven with a desire to get certain titles into print regardless of their “sale-ability.” Fifth, these publishers take risks that mainstream publishers rarely take. They take risks on bringing to print voices of minorities, new authors, experimental writing, controversial and radical subjects, translations, and reprints of classic older titles. Also, the titles are kept in print much longer that those of the mainstream press, sometimes for the life of the press. Finally, small presses are increasing in number, currently numbering over 73,000 in the U.S. that publish between one and ten titles per year. At the same time, a number of these presses are very vulnerable-many will not make it beyond their first title. Some of the directory’s presses have a questionable survival, including Rising Tide Press, Sister Vision Press, and Third Woman Press. The turnover of presses in the directory since 1998 has been approximately 50 percent.

Not found in this directory are small presses that are clearly alternative in some way, but do not fall within the defining characteristics found above. This would include publishers in subject areas such as spirituality, New Age, alternative medicine, paranormal, and conspiracy theory. While some presses having titles in erotica are included, others with a focus on pornography are not. Publishers of alternative comics are included if they also publish in other alternative subject areas. Not found are the many independent presses that have alternative titles, but not enough to be considered an alternative press. There is a major difference between alternative publishers of books and publishers of alternative books. Even corporate presses occasionally publish alternative titles, but missing is the level of dedication and compassion that so many of the alternative publishers embrace. Corporate presses are not out to change the world, rather they’re in business to profit from publishing. Academic presses are not included, though included are a few presses associated with a college or university, usually in the form of working space or affiliation with a department. Also missing are self-published alternative books and presses where a large majority of books were authored by the publisher. This latter would include, for example, Henry Rollins’s 2.13.61’s punk-advocate press, and Marvin X’s Black Bird Press.

Librarians can clearly benefit from the directory when the publications are incorporated into the library’s collection as well as its collection development procedures. The titles would readily expand the diversity of the collection and fill-in gaps. For library purchases, many of the publishers work with trade distributors, particularly Consortium, Small Press Distribution, AK Press Distribution, and Publishers Group West. Other presses require buyers to purchase directly from the press, a sometimes burdensome process for acquisitions units. Still, librarians are encouraged to do so, and should always inquire about a library discount as many provide this.