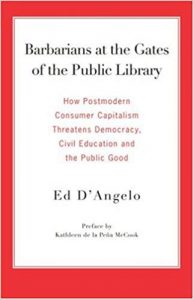 Barbarians at the Gates of the Public Library

Read the review in the SRRT Newsletter.

“This short book delivers a sweeping philosophic, economic, and historical analysis of the trends converting the American public library into a free retail outlet, measured by the same bottom lines as the rest of our consumer society. It is a sobering, convincing, and frightening view of the ongoing corruption of the ideal upon which libraries were founded, and the parallel corruption of our democratic society by the same forces. From that awful day when our own Public Library Association decided to eschew national library standards in favor of local library objectives measured by circulation and the popularity of its entertaining wares, to the declaration by library leaders that the professional judgment of librarians could be reconceived as management decisions following consumerist computer models and statistical analyses, D’Angelo traces the decline of the public good ideal both in the larger society and as it applies to the mission of the postmodern public library. It is an urgent alert, compelling in its application of the available evidence and scholarship, and frightening in its revelation that we may be too late to correct the downward spiral.”
– John N. Berry, III

“We live in dangerous times as a relentless war is being waged by market fundamentalists, political extremists, and religious zealots against all those public spheres guided by democratic values and ideals. Ed D’Angelo’s book is a brilliant recounting of public memory and a spirited defense of one of the nation’s most important public goods, the public library. Barbarians at the Gates of the Public Library is a riveting example of the language of critique and recovery, critical engagement and possibility. It is a must read for anyone who takes democracy seriously, is willing to fight for one of the country’s most important democratic public spheres, and at the same time learn something about the history and importance of the democratic function of public libraries in America. Everyone should read this book.”
– Henry Giroux

“In some libraries today, staff may be formally rebuked for failing to refer to patrons or users as “customers.” Overdue fines are not levied to promote civic responsibility, but rather to generate revenue. Meeting rooms and auditoriums, especially at new main facilities, are sold or rented at rates that few community and nonprofit groups can afford. Whole departments or collections may be prominently named after corporate donors, thus providing non-stop advertising in a public space. Weeding has become epidemically mindless and destructive. Increasing resources are devoted to digital fixes and conglomerate-produced, media-hyped bestsellers, less to geniunely diverse and dynamic small and alternative press products. Cataloging and materials selection have been increasingly dumbed-down and outsourced, the standard-setting Library of Congress even advocating that materials no longer be classified but instead shelved by height and that subject cataloging be abandoned altogether. In a profession uniquely and explicitly committed to intellectual freedom, workplace speech is decidedly not free. Ed D’Angelo furnishes the background and analysis for understanding these developments and for appreciating the library implications of such trends and theories as “market populism,” “postmodern consumer capitalism,” and the “New Economy.” For anyone wanting to comprehend how and why public librarianship has dramatically forsaken its democratizing mission and embraced the “business model,” this is a fine place to start.”
– Sanford Berman

“Ed D’Angelo’s Barbarians at the Gates of the Public Library may just be the most intelligent, insightful book written on the present plight of one our most important social institutions-the public library. Beautifully written, informed, and argued, D’Angelo traces the history of our public libraries within the greater context of what it is to have an educated, democratic society that can think critically. Against a historical backdrop that spans more than two thousands years — from Plato, Hobbes, and Mill to Bill Gates – Barbarians at the Gates of the Public Library reminds us that the most sacred beliefs in education and the public good have either been abandoned or exchanged for the values of an economically constructed consumer society that cares more about being entertained (being put in a state of trance) than it does about the pleasures of being able to rationally reflect on its world — a requisite of democracy. D’Angelo does well not only to take corporate information technology to task, but also members of his own profession, who are only too willing to sell out the “public” in public libraries for the glitzy promises of easily consumable internet bytes. This book is a much welcome antidote against the inanity of the vast majority of articles and books on librarianship-a book however, not just for librarians and educators, but for anyone interested in all the good things that education and books have to offer.”
– Rolando Pérez

Ed D’Angelo was born in Brooklyn, New York, where the schools, libraries and his own family taught him to value education and the cultural ferment of the 1960s instilled in him a passion for inquiry and intellectual discov-ery. Attending college in New York State with the aid of scholarships, teaching assistantships and fellowships just before the cost of education started to escalate, he earned six degrees in three fields, including a B.S. summa cum laude in Computer & Systems Engineering from Rensselaer Polytechnic Institute, a Ph.D. in Philosophy from the State University of New York at Stony Brook, and an M.L.S. from the State University of New York at Albany. In his dissertation at Stony Brook Dr. D’Angelo developed a theory of consciousness that drew upon the works of Carl Jung, Friedrich Nietzsche and modern neuroscience. Between 1988 and 1992 he served as an Adjunct Assistant Professor of Philosophy at Rensselaer Polytechnic Institute and at other colleges and universities in New York’s Capital District. He taught the history of philosophy, the phi-losophy of religion and political philosophy. In 1992 he returned to Brooklyn to work at the Brooklyn Public Library. Between 1994 and 1998 he served on the collective that opened Blackout Bookstore and Infoshop in New York’s Lower East Side. Today he is a Supervising Librarian at a large branch library in Bensonhurst where since 2003 he has led a philosophy discussion group for the public. In his spare time Dr. D’Angelo enjoys running, vegetarian cooking and reading. He would like to thank his friend and companion, Lisa, for her support.

Ed D’Angelo can be reached by email at ed_dangelo@hotmail.com

Read chapters one and two