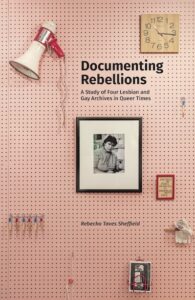 A Study of Four Lesbian and Gay Archives in Queer Times

Series on Gender and Sexuality in Information Studies

Documenting Rebellions is a study of four archives that were constituted with a common desire to preserve the memory and evidence of lesbian and gay people. They are The Lesbian Herstory Archives (New York), The ONE National Gay and Lesbian Archives (Los Angeles), the June L. Mazer Lesbian Archives (West Hollywood), and the ArQuives: Canada’s LGBTQ2+ Archives (Toronto). Using a narrative approach that draws from first-person accounts and archival research, each chapter tells a story about how these organizations came to exist, who has supported them over time, and how they have survived for more than forty years. This book is the result of a five-year project that began in 2012 and builds on the author’s own experience working with lesbian and gay archives. In Documenting Rebellions, Sheffield places lesbian and gay archives in the context of changing political opportunity structures that have afforded a liberal lesbian and gay rights movement some successes while continuing to marginalize intersectional, queer and trans people. The goal of this study is not to critique these organizations, but to show how this cohort of community archives has been affected by the very same combination of socio-political and economic factors that shape the cultural histories that they preserve. Documenting Rebellions consider the material needs of archives – space, money, and expertise – that are sometimes rendered invisible by the idiosyncratically subjective cultural theory model of ‘the archive’ that has emerged from within interdisciplinary studies. By tracing the emergence and development of these organizations, Sheffield uncovers representational politics, institutional pluralism, generational divides, shifting national politics, interpersonal relationships, and challenges with sustainability, both financial and otherwise.

Rebecka Taves Sheffield is an archivist and archival educator based in Hamilton, Ontario. She has taught in graduate programs at Simmons University School of Library and Information Science, for the University of Toronto iSchool, and for Library Juice Academy. Presently, she is a senior policy advisor for the Archives of Ontario and works on digital recordkeeping strategies. Rebecka previously served as the Executive Director for the ArQuives (formerly the Canadian Lesbian and Gay Archives), where she spent the better part of a decade learning as much as possible about Canada’s LGBTQ2+ histories. She has studied sociology, gender studies, publishing, and archives. She completed a PhD in information studies and sexual diversity studies at the University of Toronto.