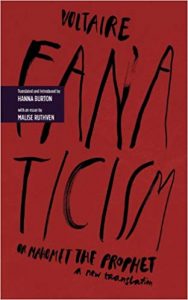 Voltaire’s Fanaticism, or Mahomet the Prophet

Voltaire’s play Fanaticism, or Mahomet the Prophet was controversial in its own day, and has stirred up controversy in recent decades as attempts to mount stage productions have been met with protests. Originally intended as an oblique criticism of the Catholic Church and religious fanaticism in general (as Voltaire understood it), the play stands today as an entertaining melodrama marked by gleeful irreverence and historical imagination. This new prose translation into English by Hanna Burton brings the text to modern English-speaking audiences. The translator’s extensive introduction sheds light on the history of the work and its reception by Voltaire’s contemporaries.

Read the preface by Malise Ruthven.