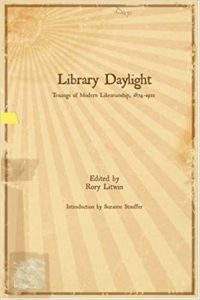 Library Daylight is an eclectic collection of thirty-six articles about libraries and librarianship published between 1874 and 1922. These items, most of which will be new even to those most well-versed in American library history, cover topics that are hotly discussed today: library education, women’s issues, library technology, the image of librarians, copyright, the tension between libraries as educational institutions and libraries as popular centers, the nature of library service, the public sphere, library PR, librarians and political activism, and visions of the future. The sources of these articles include early ALA conference proceedings, early issues of Library Journal and other library periodicals, daily newspapers, and popular magazines. Authors range from still-well-known leaders in the field to anonymous journalists. This will be rewarding reading for anyone interested in how our present-day issues are connected to the library past.

Germantown Quakers Check the Spread of Novel Reading
From the 1874 annual report of a small public library established by Quakers in Germantown, Pennsylvania. Published in The Nation

Brief item in The Nation on copyright in Germany, 1880

The Father of the American Libraries
By Bunford Samuel, 1883

Women in Libraries: How They are Handicapped
By Melvil Dewey, 1886

Librarianship as a Profession for Women
By Miss Richardson, 1894

The Telegraph in the Library
By Richard Garnett, 1899

On George Iles’ plea for a headquarters for ALA
The Nation, 1903

Wild Flower Show at the Free Library
From The San Francisco Call, March 27, 1904

The Library: Its Past and Future
By Guido Biagi, 1904

The Library as Social Centre
by Miss Gratia Alta Countryman, 1905

Letter to the Editor of The Nation on “The librarian who reads is dead”
Published Nov. 7, 1912

Note on 1913 ALA Annual Conference in The Dial

The Region of the Unromantic
The Dial, December 1, 1913

The People’s Share in the Public Library
By Arthur E. Bostwick, 1915

How Far Should the Library Aid the Peace Movement and Similar Propaganda?
By George F. Bowerman, 1915

Some Tendencies of American Thought
By Dr. Arthur E. Bostwick, 1915

The Larger Publicity of the Library
By Joseph L. Wheeler, 1916

“Human Interest” in the Public Library
By Marilla Waite Freeman, 1917

Libraries Should Provide for the Reader Who Smokes
San Francisco Examiner, February 20, 1919

Copyright and the Publishers: A Review of Thirty Years (and Reply)
By M. L. Raney, 1922.