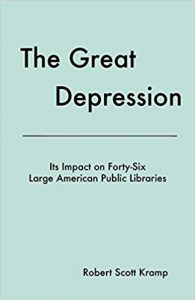 Its Impact on Forty-Six Large American Public Libraries, an Analysis of Published Writings of Their Directors

This 1975 dissertation used content analysis to study the impact of the Great Depression on large American public libraries from 1930 to 1940. Areas studied were the depression’s effect on library internal operations, library services, and library directors’ attitudes toward the libraries and the public. Particular attention is paid to the depression-related ideas of the thirteen directors who contributed the largest amount of material to the universe.

The study concluded that measurable relationships could be found between economic data, library statistics, and director discussions.