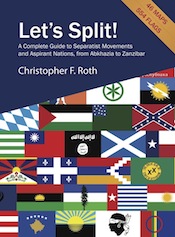 Chris Roth is the author of Let’s Split! A Complete Guide to Separatist Movements and Aspirant Nations, from Abkhazia to Zanzibar, which was published by Litwin Books in March of this year. Chris is a social-cultural and linguistic anthropologist with an interest in the symbolic politics of nationalism and ethnicity. He has worked extensively with indigenous groups in northern British Columbia and southeast Alaska and is the author of an ethnography of the Tsimshian Nation. He has also done research with and about New Age and paranormal subcultures in the U.S. and elsewhere. Don’t be intimidated by his academic accomplishments though. As a writer and a person, Chris has a sense of fun and an earthy sense of humor. He publishes an entertaining and very informative blog about micronations and nationalist movements called “Springtime of Nations.” Chris agreed to do an interview with me about his book, to better give people a a sense about it.

Chris, thanks for agreeing to this interview.

I’d like to start by asking about your blog, Springtime of Nations, which kind of led to the book. Would you describe it and tell us how it got started?

I started the blog in 2011, around the time I began working on Let’s Split! In a way, the book sort of led to the blog—or they led to each other, I suppose—since I was researching the topic of separatist movements and finding that underneath all of the so-called “normal” international politics in the news there were these smaller struggles for self-determination that were being lost amid the noise, and I started presenting these stories as news dispatches from a sort of alternative international order. Of course in the years since then the world has changed a lot. Now things like the Scottish and Catalonian independence votes, and Islamic State and Kurdistan forming themselves in the Middle East, and of course the Russian puppet states sprouting like mushrooms in Ukraine, are bigger stories. I was analyzing and commenting on things like the rise of ISIS and the powderkeg of Crimea before the mainstream media were. For years I did a feature in the blog called “The Week in Separatist News,” which involved sifting through piles of news reports from around the world, and this was a fantastic way to do the front-end, moving-target research on the hundreds of movements worldwide that I discuss in the book. Lots of people, even overseas, have told me that when they Google “springtime of nations” the first thing that comes up is my blog. The Wikipedia article on the actual Springtime of Nations—the wave of European revolutions in 1848—is actually only the second hit. That kind of surprised me the first time I noticed it. So I guess people are reading it!

In addition to being fun to read, your blog really has turned into an unparalleled information resource on the topic, and so is the book. Why don’t you give an outline of the book itself?

Well, this is an example of a book written because it was a book the author wanted to read. I was frustrated that there wasn’t a single volume that gave an overview of modern separatist movements in the way that readers would be able to connect with. There were global guides to rebel movements written by security-consulting firms, there were a few books specifically on micronations, and there were some rather slapped together volumes listing independence movements which had either no maps at all or only tiny crude maps; one such book had flags, but they were in black and white, which makes one wonder: why bother? It occurred to me that a lot of the trends underlying separatist movements were bigger than local: the attempts to erase or redraw borders left over from European colonialism in places like Africa and the Middle East, grass-roots indigenous movements in places like South America and the South Pacific and the Arctic, the ongoing fragmentation of former pieces of the Soviet Union and Yugoslavia, and tensions arising with those discontented with the European Union—all of these phenomena deserved to be addressed in a way that allowed the reader to see this phenomena alongside one another and interacting. This also allows readers to see larger-scale historical trends—for example, the sense that empires based in Moscow, London, Istanbul, Tehran, and Berlin (in Berlin’s case, a monetary empire) are still trying to sort out where their respective spheres of influence begin and end after the geopolitical earthquake of 1918, when World War I ended. In some ways, World War I has more geopolitical reverberations today than World War II does—that’s how the whole idea of “self-determination” “became a thing,” as they say nowadays—and its aftermath is still being worked out in borderlands like the Balkans and the Caucasus and the Steppes and the Levant. Most of all, I was lucky to have a publisher that shared my vision that a book that brought together large amounts of information that hadn’t been brought together before also needed to have that information visually presented in a new way that would grab people. One of the things I’m happiest about with the book is that as you flip through it there are these dozens of maps that are full color and that show different layers of information about a particular region—historical borders, aspired-to borders, demographic features like the distribution of different ethnic and linguistic groups, and also some of the resource areas and trade routes that sharpen a lot of the ongoing conflicts and movements. The first few map makers we talked to said, “No, no, you can’t do all that in one map, you’d better just have one map that shows the languages of the region, and another one showing what the borders were before 1918, and another one” etc. etc. And I said, “No, but it’s all connected, you can’t understand why what’s happening in Iraq and Syria is happening in the way it is unless you see it, bang, all at once.” Valerie Sebestien did our maps and they’re unlike any collection of maps I’ve seen. In conjunction with the hundreds of flag designs and the sidebars with numbers and data in them scattered through the book, and what’s I hoped would be the go-to book for anyone interested in this very central topic.

Yes, I think it is the go-to book on this topic, whether someone is looking for a reference book or a book to sit and read on a Sunday afternoon. As you recall, when we first discussed the book, I was expecting it to be much shorter, and I was surprised by the amount of work the designer had to put into it to lay out all the pages (and how much money she charged us). The length of it – it comes it at 634 large-format pages. Had you ever written something that substantial? Was it a surprise to you as well?

It was. I realized it was a big topic, but I didn’t realize how much space I would need to give it the treatment it really deserves. I envisioned something that would weigh in as much shorter. If I’d known from the beginning that the final product would be that long I might not have had the guts to jump in and start, but as it happened it just mushroomed. My other full book, which is an academic book, an ethnography of the Tsimshian tribal group in Alaska and British Columbia, was shorter, but I must say it took longer than I expected it would. I’m a perfectionist at heart, I suppose: I wanted to make sure that the issues I wanted to raise and the points I wanted to make were completely nailed down, and I took a similar approach with getting Let’s Split! to a point where I felt it was doing its full job. Of course, with Let’s Split!, there’s a difference: since I discuss ongoing political situations, I’m writing about a moving target. Some aspects of it are—I won’t say outdated—but partially superceded. That’s inevitable. But I was happy it saw print on a timetable that allowed last year’s Scottish referendum and the expansion of ISIS and the eastern Ukrainian conflict to get full treatments in there. And I feel the book sets a historical and political background for new events that may arise. When new separatist regions flare up—and I’m anticipating further disintegration in Libya and Moldova soon, as well as an acceleration toward independence in Kurdistan and regional fragmentation within England—Let’s Split! is still a place to turn to to understand the history and the dynamics.

I think we’ve given people a fair idea of the book. As a final question, what other book projects do you envision maybe doing down the road?

It would be nice to be able to update Let’s Split! every few years to keep up with current events, but whether it makes sense to do that will depend, of course, on its reception. Recently, I’ve been intrigued by deposed royal families and governments-in-exile, which is a category of non-state or pseudo-state that overlaps with the material in Let’s Split! but also gets at some of the legal and metaphysical questions at the very root of the idea of statehood, and also involves an appreciation of social structures and descent systems in different cultures, which is an interest of mine coming out of anthropology. As with Let’s Split!, one of the attractions of this topic is that it’s a zone where serious geopolitical and legal questions intersect with wildly colorful stories of real people whose stories tend to get buried in the 21st-century news cycle. I’m not sure I’m up to another giant global survey of a volume, but those are the kinds of alleys and byways of history and politics that my mind is running down lately. Readers can check out the Let’s Split! Facebook page as well as the Springtime of Nations blog to see what sorts of things are turning up in my research as I start to orient myself for the next thing.

That sounds like some very interesting material on the horizon. I hope that Litwin Books will be involved in publishing it.

Thanks very much for taking the time to do this interview.

2 comments on “Interview with Chris Roth”