New book: A Space for Hate: The White Power Movement’s Adaptation into Cyberspace 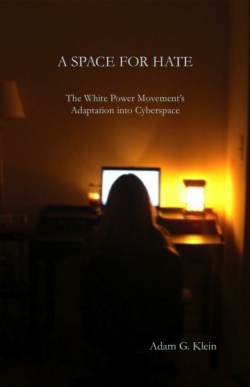 A Space for Hate: The White Power Movement’s Adaptation into Cyberspace

A Space for Hate speaks to the media and information topic of hate speech in cyberspace, but more specifically, how its inscribers have adapted their movement into the social networking and information-providing contexts of the modern online community. While many books in recent years have addressed the notable ways that popular internet culture and cyber trends such as blogging have democratized the community of information seekers and providers, little research to date has addressed the darker element that has emerged from that same democratic sphere. That is, the huge resurgence and successful transformation of hate groups across cyberspace, and in particular, those that promote white supremacist ideas and causes. In 2009, hate speech and white power movement organizations in the United States are on the rise once again, fueled by new issues but with familiar themes. Among them, the nomination of the first African-American president of the United States, a national economic crisis that has triggered ethnic scapegoating, and an immigration debate centered largely on illegal Hispanic immigrants. These are just some of the emerging social issues by which today’s hate groups have framed familiar messages of blame, anger, fear, resistance, uprising and action.

The author’s interest in this book project evolved from examining the powerful effects of what many media scholars commonly deem the “hypodermic needle” of mass communication – propaganda. Being the grandson of two Auschwitz survivors who documented their stories through oral and written tradition, his research in the modern day forms of hateful propaganda emanates from a desire to pursue the unanswered question of how the fever of racist sentiment can sweep over a civilized society as it has done so brutally in the past. A Space for Hate focuses on the white power movement, in particular, by using hate-based websites as a concrete and measurable field for examining racial and ethnically targeting messages in the age of information and technology. Perhaps nowhere is this phenomenon more widespread today than within the unguarded walls of cyberspace. The increasingly acceptable domain of racist and anti-Semitic expression within such commonplace websites as Wikipedia, an “information” tool, and YouTube, the younger web community’s digital hub, initially suggested the need to further research the way that cyberspace was allowing blatant hate speech to once again flourish within mainstream popular culture. That investigation led to an investigation of white power movement websites where the new face of hate, in fact, does not resemble the book burning rallies of the neo-Nazi banner but rather the popular forums, media convergence centers, and information tools of social networking websites.

A Space for Hate speaks to the interests of readers of media and information studies material by focusing on three central spheres of hate speech in cyberspace: the legal/ethical concern, the cultural context, and the information aspect, each of which leads into the main body of the study of a series of hate group websites. First, any work on hate speech must begin by addressing the ‘free speech versus hate speech’ debate that has always surrounded the issue of hateful rhetoric in the media, and is further currently being tested on new ground in the World Wide Web. Tied into the legal debate of hate speech on the web are the ethical issues of the internet space itself such as its unregulated content, decentralized and unaccountable domain, and limitless exposure to younger audiences. Second, and perhaps most relevant to this topic is the cultural youth element of cyberspace, specifically those popular trends that have allowed hate-groups to adapt and flourish often under the camouflage of a “user-friendly” social network community. Finally the book investigates exactly how these hate groups are entering into the mainstream media culture by playing on traditional formats which convey their movements as tools of information – educational, political, spiritual, and even scientific in nature.