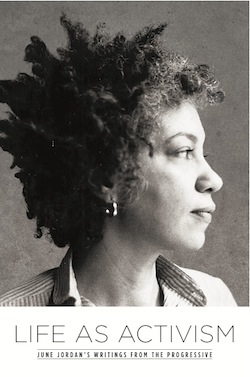 Life as Activism: June Jordan’s Writings for The Progressive

This volume is a complete collection of June Jordan’s columns for The Progressive, published between 1989 and 2001. Jordan (1936-2002) was a poet and UC Berkeley professor who is celebrated as a great human rights activist and social critic. Through her work, she taught a concept of “life as activism,” based on inclusiveness, consistency, honesty, and identification with the oppressed. Far from being a purely idealistic and unsustainable approach to life, Jordan demonstrated that “life as activism” can be a way of engaging with the world that is accessible to all people who are committed to social justice. The writings collected here can be read as a road map to such a life of activism. These columns provide a critical study of important issues from the end of the twentieth century, as well as a clear illustration of the intersections of many forms of injustice and oppression, celebrating a movement away from single-issue politics to a far-reaching activism.

The publisher hopes that through this collection Jordan’s work will become more widely known.