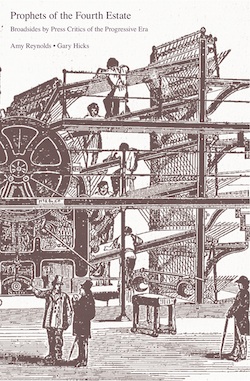 Prophets of the Fourth Estate: Broadsides by Press Critics of the Progressive Era

Prophets of the Fourth Estate: Broadsides by Press Critics of the Progressive Era highlights press criticisms during the Progressive Era (1890-1920) that aimed to enhance the role of the press in a democracy, limit corporatization, and better utilize the press’ capacity as an agent for social change. This insightful history of the press criticism of the era includes selections from the writings of critics of the news media of the time. The press critics discussed and republished in this volume include Charles Edward Russell, Moorfield Storey, Oswald Garrison Villard, Donald Wilhelm, Roscoe C.E. Brown, anonymous editorial writers at The Public and The Nation, and others. Their ideas and challenges to the corporate/commercial press model are as relevant today as they were nearly a century ago.

Amy Reynolds is the Thomas O. and Darlene Ryder Distinguished Professor II and Associate Dean for Graduate Studies and Research in the Manship School of Mass Communication at Louisiana State University. Gary R. Hicks is associate professor and chair of the Department of Mass Communications at Southern Illinois University Edwardsville.