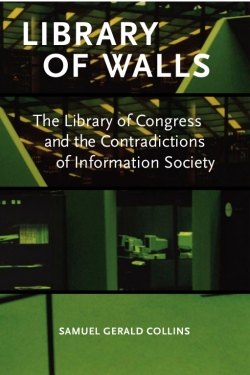 Library of Walls: The Library of Congress and the Contradictions of Information Society

“The experience [of reading this book] was something akin to watching a reality show featuring Jorge Luis Borges, Marshall McLuhan, Michel Foucault, Lewis Mumford, and Paul Virilio in the Library of Congress—surreal twists of perspective, profound insights into mass media, piercing critiques of power, solid sociocultural observations, and dire warnings about the future—twisting through a maze of stacks and fiber optic cables at the heart of the American political establishment. This is no mere book about libraries (though it is that, too), it is an ambitious investigation of the Information Society itself—its mythology, economics, and politics….

“Ultimately, the strength of Library of Walls rests in the utter appropriateness of its topic. The temporal situation of the archive, both as an attempt to account for a history of the present as required by a future that does not exist yet and as a fragmented account of the past, offers a compelling account of the process of culture as both historically rooted and up for grabs. It is culture in the ‘future perfect,’ determined but not overly so, free but not without limit. And the Library of Congress is the archive par excellence. It tells a valuable story of American history, but, more importantly, it maps traces of the new world order, the neoliberal priorities of an emerging global marketplace, and the practices of the new economy. Fortunately, Collins is able to connect these dots with creativity, skill, and originality.”

— From the Foreword by Davin Heckman

In Library of Walls, Samuel Collins engages the heterogeneities of information society at the Library of Congress through ethnographic fieldwork, suggesting that “information society” is best understood at the locus of conflicting modalities imbricating text, space, work and life. During the 1990’s, the Library of Congress was beset with challenges to its traditional roles in cataloging and scholarship while at the same time re-inventing itself as a library “without walls.” The “order of books” was threatened on several fronts: in the explosive growth of accessions, in the challenges of online materials and different container types, and in fundamental disagreements about the role of the Library vis-à-vis the nation. But rather than analyze these as separate etiologies, Collins sees them as the expression of an inherently Janus-faced information society that limits information and forecloses debate even as it multiplies avenues of access. Collins considers multiple sites at the Library-its spaces, its artifacts and organization-as contested sites where varied actors negotiate information, knowledge and nation amidst an institution whose own shifting priorities synecdochally mirror the ambiguities and unease of contemporary society. What Collins’ research suggests is that the technologies of reading (books, catalogs, web pages) must be understood in the context of their contradictory production, an ultimately salutary intervention in an era where, surrounded by our variously networked techno-fetishes, it is difficult to see information society for what it is-a chimera of shifting configurations of technology, social life and cultural meaning. However many books are digitized and however accessible information becomes in the digital age, Collins urges us to examine the powerful exclusions concealed in the umbra of these technological revolutions.