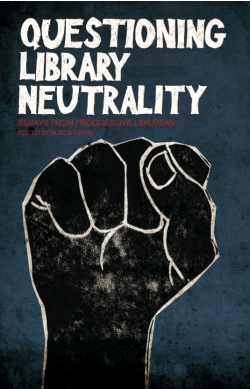 We begin with Progressive Librarian editor Mark Rosenzweig’s editorial, “Politics and Anti-Politics,” which provides a philosophical framework for considering the historical role of “neutrality” within the profession of librarianship. It is followed by Peter McDonald’s “Corporate Inroads and Librarianship,” which exposes the outsourcing of library functions in various settings and advocates for the retention of local professional involvement and humanistic values. Sandy Iverson provides a post-modernist and feminist critique of neutrality or “objectivity” in “Librarianship and Resistance.” Steven Joyce revisits the so-called “Berninghausen debate” surrounding issues of social responsibilities within the American Library Association in the 1970s and relates it to a similar conflict within the profession over homosexuality in the 1990s in “A Few Gates Redux.” In “Activist Librarianship: Heritage or Heresy?” Ann Sparanese relates the circumstances surrounding her now-famous “saving” of Michael Moore’s book Stupid White Men and the motivations behind her own decision to act rather than remain a passive, neutral observer. Robert Jensen provides useful insights into the impossibility of remaining neutral with his comparison of librarians to professionals working in journalism and higher education in “The Myth of the Neutral Professional.” Jack Andersen’s “Information Criticism: Where is It?” looks at librarianship’s inability to critique and analyze the information it deals with and places the blame for this on the profession’s embrace of a technological and managerial discourse that overlooks practical use and societal impact. Likewise, John Doherty challenges librarianship’s lack of critical self-awareness in “Towards Self-Reflection in Librarianship: What is Praxis?” and provides practical examples of his own attempts to integrate the ideas of educational theorists into his practice of bibliographic instruction. In “The Professional is Political,” Shiraz Durrani and Elizabeth Smallwood examine the library within a global context, then narrow their focus to innovative practices in public libraries in Britain, providing a concrete example of a needs-based youth advocacy program. Lastly, Joseph Good critiques neutrality as a form of moral relativism in “The Hottest Place in Hell.” Here at the beginning of the twenty-first century, “neutrality” no longer means “impartiality” or “objectivity,” but too often lapses into what might be better termed “indifference.” These essays are presented in the hope that they will stimulate further interest in and debate about the concept of neutrality within the library community, if not provoking the downright opposite of indifference.