Roots and Flowers: The Life and Work of the Afro-Cuban Librarian Marta Terry González 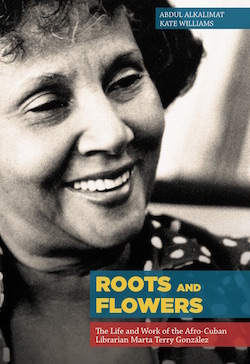 Roots and Flowers: The Life and Work of the Afro-Cuban Librarian Marta Terry González

This book introduces North Americans and other general readers to 1) the role of Afro-Cubans in Cuban history and culture, particularly in the 20th century, and 2) librarianship in the context of the Cuban revolution. Considering these two related subjects through the life and work of Marta Terry, Cuba will serve as an example for other Africans in the Americas and for all library workers in times of social change.

Marta Terry directed three centrally important Cuban libraries. Beginning in 1961 she was Che Guevara’s librarian when he organized the National Planning Board (JUCEPLAN) that set the post-1958 course for Cuba’s development. From 1967-1987, she was library director at the Casa de Las Americas, the organization built and led by Haydee Santamaria that published and connected writers and their readers from across Latin America and set a model for combining liberation politics and innovative cultural production. From 1987-1997, she was director of the José Martí National Library, at which time the library was assigned responsibility for all public library development on the Island and then managed through the collapse of the Soviet Union, then Cuba’s #1 trading partner and source of hard currency. A participant in international library gatherings since the 1950s, Marta Terry was also the point person in establishing Cuba’s international library reputation and connections through IFLA, bringing their annual meeting to Latin America for the first time in Havana in 1994. She was then also point person in defending Cuba from the US-government sponsored attack that followed, under the guise of the so-called “independent libraries.”

Abdul Alkalimat is professor emeritus of African American studies and library and information science at the University of Illinois at Urbana-Champaign.

Kate Williams is associate professor of library and information science at the University of Illinois at Urbana Champaign.