Malise Ruthven, frequent contributor to the New York Review of Books, wrote the preface to the recent Litwin Books publication, Voltaire’s Fanaticism, or Mahomet the Prophet: A New Translation. His preface is titled Voltaire and Islam, and provides an insightful picture of the great 18th century liberal’s relationship with the religion of the region Europe called “the Orient.”

Voltaire’s play has been translated into English several times, but this prose translation is less archaic-sounding, and captures the intensity of the melodramatic passions among the characters. The play itself is an enjoyable, light read. Ruthven’s preface and the translator’s introduction, which focuses on the reception that the play received among contemporaries and how it was viewed by later critics, illuminate some of the background to the way Islam is understood in the West. 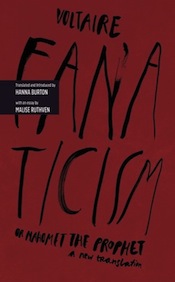