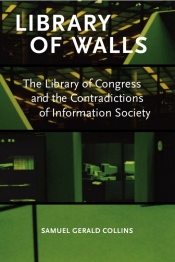 My first experience of what would become Samuel Gerald Collins’ Library of Walls came several years back, when I was an editor for the journal Reconstruction ‹reconstruction.eserver.org›. My editorial curiosity was piqued by the title of an article that Collins submitted for consideration in a special issue of the journal on “Technology and Historiography,” guest-edited by Haidee Wasson. The title: “Reading Over the Shoulder of the Future at the Library of Congress.” In one phrase, the writer had managed to tie my scholarly interest in “futurism” and “information” to my post-9/11 concerns about “surveillance” and “democracy” and to ground it in the unsexy Library of Congress. At a time when I was reading submissions on video games, TV, and comics (all things that I write about, by the way), I was stunned by Collin’s willingness to take on such a daunting subject. In those few words, I had been taken in by his ability to find a node where disparate discursive lines converge to form a site of meaning that could provide insights into the larger cultural landscape. After wading into the first few paragraphs I was blown away.

When I got the chance to read an early draft of Collins’ completed manuscript, I leapt at the opportunity, expecting a more fully-fleshed out discussion of the ideas explored in the article. Instead, it was much, much more. The experience was something akin to watching a reality show featuring Jorge Luis Borges, Marshall McLuhan, Michel Foucault, Lewis Mumford, and Paul Virilio in the Library of Congress—surreal twists of perspective, profound insights into mass media, piercing critiques of power, solid sociocultural observations, and dire warnings about the future—twisting through a maze of stacks and fiber optic cables at the heart of the American political establishment. This is no mere book about libraries (though it is that, too), it is an ambitious investigation of the Information Society itself—its mythology, economics, and politics.

Ultimately, the strength of Library of Walls rests in the utter appropriateness of its topic. The temporal situation of the archive, both as an attempt to account for a history of the present as required by a future that does not exist yet and as a fragmented account of the past, offers a compelling account of the process of culture as both historically rooted and up for grabs. It is culture in the “future perfect,” determined but not overly so, free but not without limit. And the Library of Congress is the archive par excellence. It tells a valuable story of American history, but, more importantly, it maps traces of the new world order, the neoliberal priorities of an emerging global marketplace, and the practices of the new economy. Fortunately, Collins is able to connect these dots with creativity, skill, and originality.

Collins maps sweeping changes in the Library’s vision and management against changing attitudes towards knowledge and public life and technical innovations. Each period of expansion of the Library of Congress is characterized by an attempt to anticipate its place in society against succeeding information revolutions. In each case, Collins is careful to ground the potentially mystifying field of information in material practices that make such revolutions possible. Budgets, building construction, library use, and human labor all factor into Collins’ analysis of the ideologically-loaded idea of “information.” Coupled with his predilection for critical theory, science fiction, and new media, Collins’ training as an anthropologist and his hours of careful ethnography provide a perspective that subverts the naive utopianism propagated by commercial interests, reminding readers that information is not a simple product detached from the people that create, organize, consume, and reproduce it. In Collins’ formulation, information is intimately linked to human subjects, a point which is too often lost in our current fascination with the many dazzling new media technologies.

Especially telling is the attention Collins devotes to the dramatic changes afoot in the Library since the 1980s—both in terms of the rapid rate of technological change and its impact on archiving, organization, and distribution and shifts in the political landscape which began in the Reagan era. Against the rise of technology, Collins maps the minimization of labor. Consistent with industrial trends like outsourcing, downsizing, and deskilling, the Information Society ethos of the Library’s management seeks to free information from the human hands that build the archives, the eyes that interpret its meaning, and the minds that will subsist on the symbolic order of its future. In its place, this new order offers information detached from any democratic purpose or historical context, information as a consumer good. Collins notes that this Information Society, though it seems swathed in the postmodern notion of relativistic, post-political egalitarianism, is heavily laden with ideological assumptions and real consequences for working people. In Library of Walls Collins obliterates the neoliberal fairytale of liberty through consumerism, and illustrates its contradictions through the definitive record of American culture.

Thankfully, Collins is not the only scholar who has identified the cracks in the edifice of power. But with his awareness of his discipline’s troubling imperial legacy alongside its invaluable ethnographic tools, Collins the anthropologist provides a unique perspective on the cracks in the edifice. And through his topic, “a library of walls,” Collins succeeds in identifying the edifice itself with staggering accuracy.