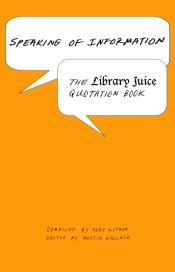 Books of quotations serve many functions. They can entertain, enrich, inform, infuriate, define (by inclusion and exclusion), and/or provide one end of a strand of knowledge to be pursued elsewhere by the enquiring mind. Some quotations are comical, some profound, but a true quotation book is neither a collection of jokes or one-liners on the one hand nor an assemblage of profundities and pomposities on the other. Essentially, every quotation book is an argument in favor of a field of study or one that attempts to influence that field of study. Even the venerable general compendia, such as The Oxford book of quotations, are arguments, rooted in their times, for a particular way of looking at the canon of literature and thought. The Oxford book of quotations (second edition, revised, 1953) argues that certain authors and certain books belong to the canon to the exclusion of other authors and books and, thus, defines what literature consisted of to its editors. It assigns ten pages to hundreds of quotations from Rudyard Kipling and four lines to two quotations from Robert Frost, thus, placing those authors on a scale of importance in that canon. In much the same way, this book of quotations is an argument for a particular way of looking at libraries, library work, and the great causes of the library profession—intellectual freedom, literacy, social responsibility, etc. Library juice was, inarguably, a progressive publication and the progressive view of libraries and librarianship could be seen in the selection of quotations that began each issue. That shaping of the field could have been seen even if this were simply a reprinting of those quotations in chronological order, but emerges even more strongly in the selection from, and grouping of, those quotations that you will find here. What is librarianship about? The compiler and editor of this book will give you an answer, one that I find compelling, an answer that can be found, at one level, in the contents list and, at another level, in the selections themselves. Fortunately for the reader, the compiler and editor take a broad as well as a progressive view and a stroll through these quotations is one undertaken with an eclectic bunch of companions. It is hard indeed to resist a selection with an index that yields the successive entries “Goering, Hermann,” “Goethe, Johann Wolfgang von,” and “Goldman, Emma.” So, relax, read, enjoy, and prepare to have your view of our profession reinforced, challenged, and/or broadened.